Felipe works out on Holiday 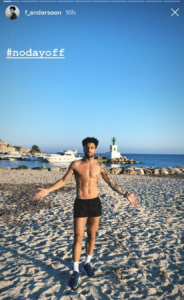 Hammer Felipe Anderson has carried on his personal training program while away on holiday as he bids to regain his fitness for next Wednesday in Manchester.

The Hammer posted a photo of himself topless on a beach together with other shots of him in a gym and training on grass with a football. The Brazilian midfielder is thought to be in Italy during his five day break but his social media post was hash tagged as ‘#NoDayOff’

The first team players are due to return to Rush Green after their mini break on Saturday with four days preparation for the re-scheduled game against Manchester City.

Anderson has been out for a month with a back injury but his return to training could mean he could feature at the Etihad. His return is seen a vital boost for West Ham in their battle to avoid relegation with David Moyes seeing him as a crucial factor.

10 comments on “Felipe works out on Holiday”