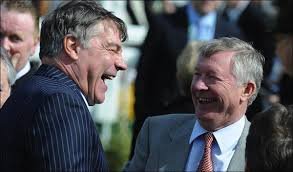 Sir Alex Ferguson  has come out in sympathy with Sam Allardyce claiming he ‘never played against any West Ham team that played football I was afraid of.’

And in updated chapters of his autobiography he adds that he didn’t understand the Hammers supporters’ insistence on the ‘West Ham way’.

Despite a famous predecessor of the old Scot – a certain Ron Greenwood describing it very adequately – it seems that such issues are lost on the 72 year old who reckons he never saw it in his 26 years as Manchester United manager. and backed Allardyce’s style as good management.

Sir Alex – it seems is a Sam man – backing his old buddy’s  style as good management, adding that West Ham fans expect too much of him and that he did well to keep them up

Ferguson also insisted that all the West Ham sides he’d faced as United boss had been either negative in their approach or lucky.

He said: ‘I hope that before I die someone can explain the “West Ham way.” What is it? They last won a trophy in 1980, the FA Cup.

‘I never played against any West Ham team that played football I was afraid of. They were always surviving, or lucky as hell against us.’

Ferguson also labelled last season’s West Ham squad as ‘a team of very average players’ who were helped by Allardyce.

And he believes the fans criticism of Allardyce’s style of football throughout last season, as uncalled for.

‘He said: “There is this preconception with West Ham fans that Big Sam is a survivalist who tells teams to boot the ball up the pitch.

‘The truth is that he stayed up with a team of very average players. That’s management. He drew the best from them.’

It’s odd that the old boy says he never saw it at one and the same time as saying he doesn’t know what it is anyway!
And for the record here’s the famous Greenwood phrase which is always considered to best sum up the West Ham Way: “The crowds at West Ham haven’t been rewarded by results but keep turning up because of the good football they see.
Other clubs will suffer from the old bugbear that results count more than anything. This has been the ruination of English football.”
Happy to help mate!
Permalink

← Rows? WHUFC no different to any other club
Kouyate factor to hit City →
Click Here for Comments >