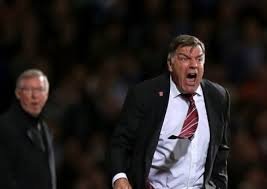 Sir Alex Ferguson – in doing his best to sell a book and defend a mate – has made himself look a colossal fool…some may say that’s not hard!

My first call of the day this morning came from Manchester where a a familiar voice from a City-supporting mate said:  “Have you read these Ferguson quotes about West Ham …what a …..!

It’s hard to disagree particularly when the comments are so confused. He declares:‘I hope that before I die someone can explain the “West Ham way.” What is it? They last won a trophy in 1980, the FA Cup.”

By my reckoning Ferguson would have been about 22 when the Irons were at the peak of their powers under Ron Greeenwood and playing a game universally known as the ‘West Ham Way.’

It was back in those days when the WHUFC Academy was  accepted as the best in the land at a time when such things as the near post corner was born under Greenwood.

Ferguson knows very well what the West Ham Way is and has done himself no favours with a ridiculous outburst which is nothing more than a bid to help out Sam. I don’t thin the old bruiser in charge of our club needs it.

The giveaway is in the line that “the West Ham fans expect too much of him” before adding: “There is this preconception with West Ham fans that Big Sam is a survivalist who tells teams to boot the ball up the pitch.

‘The truth is that he stayed up with a team of very average players. That’s management. He drew the best from them.’”

We have no problem in Fergie defending a mate – very honorable but to rubbish a club tradition that’s been in place for over half a century is just absurd and unneccessary.

James Milne – a member of the  ClaretandHugh Facebook forum – wrote this morning:  “Just read a great Fergie quote from a few years back that totally contradicts this “We played against a real good team today, all West Ham do is attack, attack, attack, and to be quiet honest with you it was a really good game of football.”