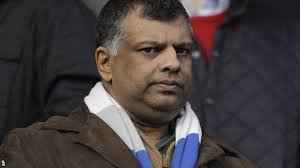 He has compared his situation to that at Upton Park last season declaring:: “This time last season, everyone wanted Sam Allardyce’s head. Now, I think they will put a statue of him at the Olympic Park.

“The manager plays a part but it is up to the players as well. Harry is a man who was tipped to be England manager  and he got us promoted.

“You look at how many clubs have gone down and not come (straight) back up. I think QPR are one of the few clubs to have come up.”

We’ll say no more given the good Tony was happy to pay half of Modibo Maiga’s wages for a few months!

← Allardyce on DG, DS, Carroll and the Irons rise
DG warns big boys: Our stars are under lock and key →
Click Here for Comments >