Fighter Fornals: ‘We did enough to get a point’ 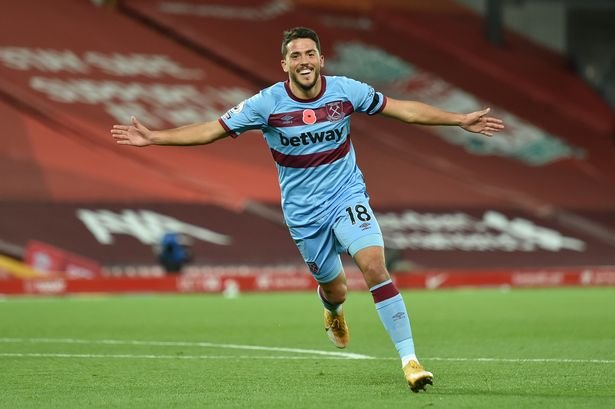 Pablo Fornals was again highly effective as the Hammers slumped to a luckless defeat at St James’ Park but refused to be downbeat about the defeat.

Fornals is a player who may not have always been appreciated by some Hammers fans but nobody works harder or shows more desire for the cause than the Spaniard.

Two crazy moments allowed Newcastle a lead they barely deserved but the Hammers could hardly have fought harder with their 10 men and Pablo typified the attitude we have come to expect from him and the squad this season.

And afterwards the 25 year old he expressed how bitterly disappointed was to come away but believes there there were positives to take into the season’s final six games.

He told www.whufc.com: ““Of course it feels worse leaving with nothing after working hard to come back, but after the first half we fought incredibly with a man less.

“At half time, the message was to try to fight because we had the desire to change [what we showed] in the first half, and we nearly did it.

“I think we did enough to get at least one point, that this is football. We’ll learn from this and keep fighting.”

But he made it very clear that the Irons intended fighting until the final whistle of a season which has been the best we have enjoyed in many years.

He declared: “It’s the same as from the first day we arrived here this season. We’ll keep fighting and enjoy the process as it’s been an unbelievable season for all of us, and all of the fans.

“I think we have to bring our emotion, our good vibes and feelings, because that’s what has brought us here.”