Fights break out at London Stadium

Posted by Sean Whetstone on September 10, 2016 in News, Whispers 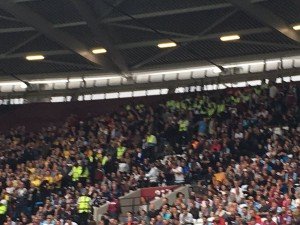 ClaretandHugh have received multiple eye witness accounts of fights and trouble at today’s Premier League game against Watford. The main areas of trouble appear to have been in block 127 in the corner of Bobby Moore Lower and the East Stand at the London Stadium and in the Sir Trevor Brooking Upper stands between the divide of the away and home fans. One eye witness told ClaretandHugh they saw six independent fights break within the Stadium this afternoon. Others feared for the safety of their children calling the current stewarding completely inadequate.

TV cameras around the world zoomed in the troubles in the lower section 127 with up to eight fans ejected. He is claimed the trouble started when one fan pushed another fan who pushed back until a fight broke out involving others. Stewards attempted to break up the fight and one eye witness alleges that one steward had one West Ham fan by his throat.

The main incident went off when Watford scored their third goal and celebrated yards away from the faces West Ham fans in the upper tier of the Sir Trevor Brooking stand to rub it in. One witness who purchased two tickets in the ballot was sitting next to the away fans with his five year old son when fighting broke out. He claims there were just nine stewards on duty to enforce the narrow segregation.  Unlike the Boleyn  Ground or other Premier League ground there was no large area of netting usually utilised in separation of rival fans and stewards struggled to  control the disorder. Police were invited in to the stadium after 20 minutes but the trouble had calmed down by that point. The game was categorised as a Cat C with small risks.

Friend of the site and former West Ham DJ, Leon Hyde sent us this video of the second half incident.

Another video of the trouble in section 127 shows the stand out with stewards. Warning contains strong language.

@davidgold you are ruining the football club! Chucking old men out for standing up? All that security for 1 old man? pic.twitter.com/Wua1Q5O5Xy

18 comments on “Fights break out at London Stadium”