Pablo Fornals’ face said it all on Monday evening.

When our Spaniard put the perfect finish to Jesse Lingard’s pure magic and Arthur Masuaku’s shrewdly weighted pass to score West Ham’s second goal  against Wolverhampton Wanderers, then turned to meet his on-rushing team mates, he had a smile that stretched from ear to ear! And why not? 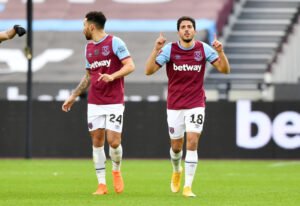 Back in the team after a two game absence through injury, Pablo had taken just 14 minutes to show how valuable he could be as we enter the last eight games of this amazing season.

We have to thank Manuel Pellegrini for bringing Fornals to the club, but it’s David Moyes who has brought the best out of him.

Pablo has flourished under Moyes’ guidance – he’s the epitome of the manager’s type of player. Non-stop work rate, totally committed and an enthusiasm that seems to bring out the best of players around him.

He’s a very popular member of the squad – and it shows.

It has to be said not everyone is a fan. I’ve seen accusations that Fornals simply runs around like a headless chicken.

That’s a misreading of his abundant energy, his endless chasing down of opponents, his covering of team mates, shutting down of space, his tenacity to win the ball – all of which have been a vital ingredient in West Ham’s success this season.

In short Pablo is a nuisance to the opposition – and Moyes clearly recognises that.

With the absence of Declan Rice, Fornal’s industry in midfield is going to be more vital than ever now.

Some people have suggested he might even be used as an option alongside Tomas Soucek in a more defensive role, but I doubt if Moyes sees that as the best use of his talents.

Pablo carries a goal threat, as Monday proved, and I believe he’s more useful to the team further forward.

On Monday Moyes had no hesitation in bringing Fornals straight back into the team – at the expense of Jarrod Bowen and Said Benrahma, both of whom were on the bench. That didn’t please everyone.

Bowen got his chance when coming on for the injured Michail Antonio – and seized it with some style. Benrahma had to wait until the 78th minute, when it was the tiring Fornals who made way for him.

Pablo will surely get the call again on Sunday when Leicester City visit the London Stadium. We’re still waiting for Said to show his true worth, so it’s no surprise that Fornals continues to get the nod ahead of him.

Pablo’s goal on Monday was his third of the season, he also has three assists to his name. He’d love to grab goal number four against the Foxes.

Who can forget his first of the season against the same midland outfit back in October last year. The perfectly timed run from deep, his instant control of Aaron Cresswell’s lofted pass, his clinical finish past the helpless Kasper Schmeichel.

A repeat of that – or something like it – on Sunday would be ideal. To add a touch of irony to the weekend fixture, after we demolished Wolves 4-0 at the London Stadium earlier in the season, next up for us in the Premier League were…..Leicester City, who we beat 3-0.

Fingers crossed history will repeat itself and we’ll go on to grab all three points again!