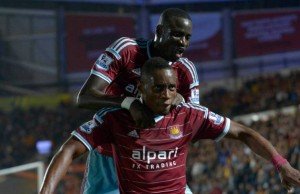 New Hammers sensation Diafra Sakho is making all the headlines in the French Press and has been speaking to  L’Equipe about his nickname and the man he is most indebted to for his move to Upton Park.

The Senegal front-man spoke of the famous incident during which he prompted an evacuation of his home after he opted to make a snack and take a shower at the same time.

He explained “The entire building, home to other Hammers such as Enner Valencia and Cheikhou Kouyate was evacuated. It was a bit of a panic.”

The player also revealed that the incident same him given the nickname “the fireman”.

The 24 year old scored his sixth Irons goal today showing he’sa little more gifted with a ball in front of him than snaclk making material.

But he again stressed it was the hard work of one man who ensured Sakho made the move to London in the summer and is probably now being seen as the bargain buy of the season so far.

In the same interview, Sakho said, “It’s only through the will of David Sullivan that I am here.”