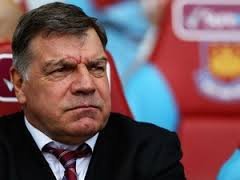 Sam Allardyce is worried about a possible hammers  fixture pile-up as the club continues its fight for Premier League survival.

The Hammers boss has seen the team move up to 10th over recent weeks but we remain only six points clear of 18th-placed Cardiff.

Hull City’s  FA Cup commitments saw our League clash scheduled for last weekend moved and we’re in the same boat for the trip to Arsenal who are involved in an  FA Cup semi-final against Wigan.

And the manager is aware that playing those rearranged games when other clubs’ players can rest up could have an effect.

“There’s not a huge amount of difference between 10th and the bottom three so that can change very, very quickly,” he said.

“Falling games behind is not what you want to do. To make those games up and points up, where others have played games if they’ve picked the points up is a difficult task.

“I think we’re going to fall another game behind in a few weeks time when we were scheduled to play Arsenal who are now in the semi-finals of the cup.

“It’s going to be a pretty tricky schedule to manage, so we have two weeks off and then we’re going to have to play three games in a week when the opposition won’t have had to do that.

← RAVEL: To sell or not to sell – the Cottee verdict!
Hammers duo can land award double →
Click Here for Comments >