Fonte greeted by just one fan! 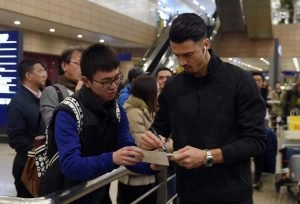 JOSE FONTE’s arrival in China has gone down like a lead baloon with fans of his new club Dalian Yifang.

The Sun reported this morning that he was greeted by just one supporter and made his way through arrivals and check out.

The capture of the Portuguese Euro 2016 winner created not a ripple judging by the lack of excitement at him touching down in Shanghai.

As the picture shows he was stopped for just one autograph with nobody else paying a blind bit of attention as the central defender made his lonely way into his new life!

That all came in contrast  to the chaotic scenes which have greeted other stars such as Oscar, Carlos Tevez and Brazilian Hulk on their switch to the CSL.

When Oscar made his move from Chelsea to Shanghai SIPG last year he was mobbed by hundreds of fans and presented with bouquets of flowers.

4 comments on “Fonte greeted by just one fan!”