Forest and ghosts of ’91 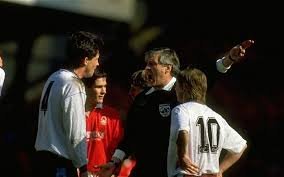 Those four words  mean one thing to me – Villa Park semi-final 1991.

We were beaten 4-0 after Tony Gale had been crazily sent off early by controversial ref Keith Hackett (see above) and for the rest of the afternoon the only roar that could be heard across Villa Park was “Billy Bonds Claret and Blue Army” getting louder and louder with every successive Forest goal.

It was the most astonishing, hair-raising display of loyalty anyone who experienced it has ever known and remains the most incredible I’ve ever known inside a football ground.

It’s the only time in five FA Cup clashes Forest have won and our most recent victory was in 2011 when we won 3-2 at Upton Park.

Today we are down to a squad of 14 and victory is not a priority for boss Sam Allardyce who has admitted the same.

Nottingham Forest midfield duo David Vaughan and Djamel Abdoun both face a race to be fit for Sunday.

Darius Henderson will be available again after serving his suspension.

Kevin Nolan starts a four-match ban while Mark Noble (calf) is the latest Iron to be  sidelined (calf).