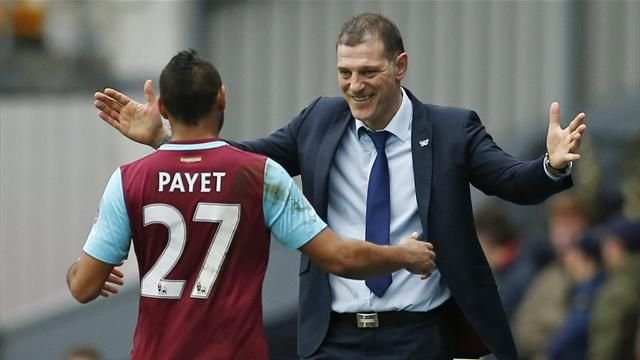 Slav and Payet in happier times

Slaven Bilic has come to terms with life after Dimitri Payet and has urged the fans to get over their bitter disappointment and remember only the good times.

Our level headed and very decent boss admitted to feeling “let down” and “angry” when the Frenchman started his dramatics.

But now he has declared: “Of course the fans are angry. But after some time, when they think about Payet they will not think about what happened at the end.

“They will think about a great year, the great games and everything that happened the year before. Now, of course, that anger and disappointment is overtaking everything that was good for the majority of the period.

“But time heals everything. They will forget. They will remember him as one of the greatest. Players are always moving and I’m not going that deep into what he should say or shouldn’t.

“He is gone, he went home — that was his wish — and I will not forget how good he was for us. He was brilliant. I was so happy and proud with my team, my staff, to help him achieve what he did.

“What he achieved with us was a great story for West Ham for the Premier League and for France. I want to thank him for everything he did for us. He was brilliant last year. We were brilliant for him also.

“Now that story’s finished, I wish him luck and all the best at Marseille.”

← Slav turned down £100,000 per week defender
Slav weighs up City and an end to “chasing” game →
Click Here for Comments >