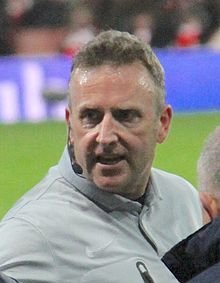 Keith Hackett’s is never a name that will be remembered with any affection by Hammers fans.

Some of were around to watch his shocking decision in sending off Tony Gale in the 90s FA Cup semi against Nottingham Forest for a supposed foul on Gary Crosby will never forgive him.

It was a horrible decision right out of the top drawer and or those of us there who kept up the chant of “Billy Bonds Claret and Blue Army” as we slumped to that 4-0 Villa Park defeat  it remains a bitter sweet moment knowing what an incredible bunch of fans we are at our best in the face of the lousiest of decisions.

Hackett, however, is still very much in circulation and has decided to pass his opinion on Jonathon Moss’s incredible decision to play advantage for that almost certain goal which would have fallen to Jesse or Said yesterday. Hackett knows all about rubbish decisions after all!

He passes on his thoughts in a column for https://www.caughtoffside.com/2021/03/22/keith-hackett-column-jon-moss-cost-west-ham-vs-arsenal-and-referees-should-be-dropped-for-their-mistakes/

The former Premier League and FIFA referee said: “At 3-1 to West Ham, Moss saw an offence on a Hammers player, did nothing and allowed play to continue with Jesse Lingard in a very good attacking position.

Suddenly, with a very late whistle, he stopped play, halting the promising attack and awarding a free-kick to West Ham. That was a very poor piece of officiating and not acceptable at this level of the game.

David Moyes was rightly upset, with Moss then picking up the ball before walking towards him and exchanging words. In fairness to Moyes he maintained good self discipline.

What was also surprising was that Moss didn’t intervene earlier in the game when two goals had resulted after he had (rightly) allowed the players to take a quick free kick.

Just shows that he can get it right sometimes.