Former Fox Savage: “It has to be the Hammers” 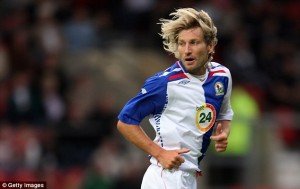 The Match of the Day pundit recalls scoring the Filbert Street winner against us in 2000 and was in the team which defeated us at home two seasons later when Darren Eadie’s grabbed the winner – our only defeat by the Foxes at our place since 1966.

Sav recalls his Filbert Street goal when he took  a pass from Stefan Oakes and slid the winner under Shaka Hislop.

East-ender and Irons fan Muzzy Izzet had equalised an early Frederick Kanoute goal as City scored a rare victory over us.

Sav sees no repeats this weekend declaring: “City are all over the shop at the back – they just can’t defend and I’ll take the Hammers to win it 2-0.

Sav recalled  the last victory at Upton Park too adding: “I remember the Darren Eadie match as well but it’s always been hard work against the Irons. and downhill all the way against you after that as it had been before.

“I celebrated mine at Filbert Street vy diving into the crowd – it was a speciasl win over a team we never got much from. I remember you had the likes of Michael Carrick, Frank Lampard and trevor sinclair in the team – it was a bit special.

“But you will have too much for the Foxes this time. You are flying and have so much pace and power – I can’t see City coping at all.”