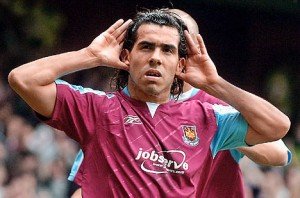 The agent of former Hammer Carlos Tevez, Kia Joorabchian, has hit back at criticism by Gary Neville that the striker downed tools at Manchester United.

The Sky Sports pundit recently slammed Tevez for apparently lacking professionalism towards the end of the Argentinian’s two-year stay at Old Trafford. “What annoyed me about Tevez was that he downed tools in his second season,” said Neville. “I felt disappointed that, as a professional, he didn’t act the right way.”

But Joorabchian has hit back claiming that Neville hasn’t “done his homework” on Tevez. The pair, having been United teammates under Alex Ferguson, are now seemingly at loggerheads.

“Absolutely not, he was desperate to play,” insisted the agent” adding: “He scored 15 goals with seven assists, his record was superb. Every time, he was available for every game bar the three he missed through injury.

“I think the person’s professionalism to be questioned is Gary Neville because he didn’t do his homework on Carlos’ career or as a reporter to say why Tevez wasn’t [professional]. He never made any phone calls, he never asked the question of me or anyone to know what has happened.

“By saying things like that, he is putting a mark on the back of a player who has won double or triple the trophies he has ever won.

“Carlos has won trophies in every single league he has ever played in, he has been nominated as player of the year in South America more than any other player in history and now, at the age of 34, he’s just won the league and scored the winning goal with Boca Juniors again.”