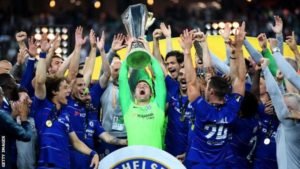 The 39-year-old started his career as a trainee at Norwich City and finished at Chelsea during his 23-year career.

Green says celebrating the Europa League win with Chelsea was a “fitting” way to end his career after more than 650 professional appearances.

“It’s been an amazing journey for me in the game and I’ve loved every moment,” said Green, who last played for his country in 2012.

“I’ve played with and against some of the best players in the world and have experienced so much that professional football has to offer.

He arrived at Stamford Bridge on a free transfer from Huddersfield Town in 2018, as their third-choice keeper.

Last week he celebrated winning the Europa League final with Chelsea by picking up a medal despite not playing a single minute in the competition.