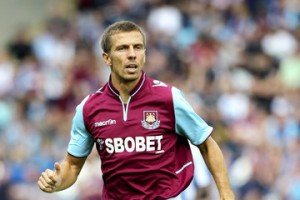 Former Hammer Gary O’Neil has been appointed as assistant coach of Liverpool’s U23s.

In 2011, O’Neil completed a move to West Ham on a ​2 1⁄2-year contract for £2.6m.. His 2010–11 season was ended prematurely on 16 April 2011 following a horror tackle by then Aston Villa’s Nigel Reo-Coker during West Ham’s 2–1 home defeat at Upton Park. O’Neil was carried off on a stretcher after the challenge. He underwent a two-hour ankle operation and endured several months out of action with concern that his footballing career was in jeopardy.

In the summer of 2013, the Premier League confirmed that he had been released by West Ham. Although released, O’Neil said that discussions were taking place related to him being offered a new contract and that he was likely to sign a new deal nearer the start of the new season. However, David Gold announced on his Twitter account that O’Neil had declined a new contract offer, and consequently became a free agent.

“It’s been going on for a little while and obviously with the break and the Academy having to take an even longer break than the first team, I’ve had to wait a little while, but now it’s finally come around and I’m really excited and can’t wait to get going.”