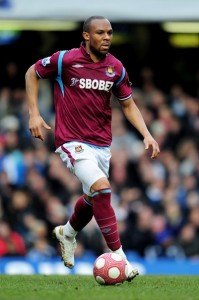 Gabbidon added on social media “Then watch how many West Ham players are left up field when the 2nd goal goal goes in! 5! This is only 1-0 remember #naive #WHUFC“

Later saying “Everton showed more every energy 2nd half nullified Payet too” & “Leave five up field all season and see how many clean sheets you keep….”

When questioned by a West Ham fan on what Gabbidon would have done:

The licensed coach said: “Kept him (Obiang) on… it was 1-0 not 4-0 coulda taken Antonio off he weren’t great…” or  “Take Lanzini off then”

Gabbidon made 113 appearances for the Hammers  between 2005 and 2011. He was signed from Cardiff City for £175,000 in 2005 but was released in 2011 to join QPR on a free transfer before later join Crystal Palace before returning to Cardiff City when he hung up his boots last year.