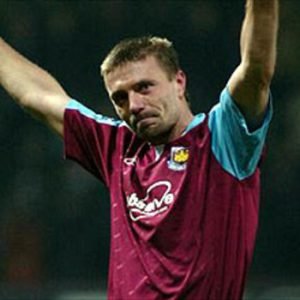 The 45-year-old avoided reporters’ questions but was greeted with brutal taunts from prisoners aware of his former fame. Repka’s lawyer Jaroslav Jankrle revealed the former Hammer had expected a lighter sentence.

He said Repka “had been more optimistic regarding the result”.

In 2015 and 2016 he was given a suspended sentence for drink-driving, and community service for not paying alimony to his former wife. Then last year Repka was jailed for six months after publishing a fake escort girl ad with his ex-wife’s photo and phone number. That sentence was downgraded to his second stint of community service.

Repka faced inmates’ cries of “You will die here” and “Welcome to hell” as he started his two-year sentence.

← Gomes? So far, what Pelle wants he gets
Rice wants Chelsea midfielder at West Ham →
Click Here for Comments >

One comment on “Former Hammer faces death threats in prison”