Former Hammer hopes to haunt us! 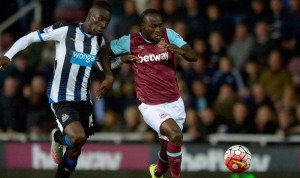 Victor Moses readily admits he had a happy time and has good memories of West Ham.

But he is equally emphatic that he hopes to come back and haunt the Hammers when we go in to action against Chelsea next Monday evening.

Slav chose  to make his loan move to the club permanent last summer and since returning to Stamford Bridge he has become a first team regular having seen action in 28 games for four goals.

And speaking ahead of the game he said:

He told British Media: “I had a great time there [West Ham] last season, it’s a nice memory but I’m a Chelsea player now and I’m enjoying my football. I can’t wait to go to the London Stadium and hopefully we’ll get three points.

“I’ve always wanted to play for this big club, it’s one of the best clubs in the world at the moment and I’m enjoying every single minute.”

7 comments on “Former Hammer hopes to haunt us!”