Posted by Sean Whetstone on March 1, 2016 in Videos, Whispers 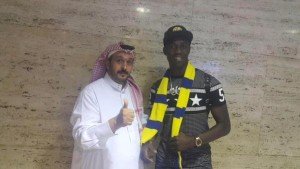 Maïga has scored just two goals in the Saudi championship since joining from West Ham last summer. During his debut in the Asian Champions League today he scored the only goal of the game to seal victory.

The Mali international spent three years in east London, during which he scored seven goals in 45 appearances.
Maiga will be best remembered for scoring against Chelsea at the Boleyn Ground in December 2012 and a League Cup quarter-final winner at Spurs in December 2013.Signed from Sochaux in July 2012 for £4.7m, the 27-year-old had two loan spells away from the Hammers during his time with the Club, at Queens Park Rangers and French side Metz.