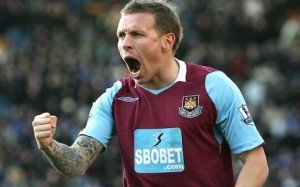 Craig Bellamy has held talks with Oxford United and could be confirmed as their new manager in the next week.

The former West Ham striker, who is part of Neil Warnock’s coaching staff as their player development manager at Cardiff, has held a series of discussions with the League One club over the last fortnight and looks likely to replace Pep Clotet who was sacked at the end of last month.

League One strugglers Oxford would be the 38-year-old’s first senior managerial role. The Us are 15th in the League One table, five points clear of the relegation zone.

Cardiff recognises Bellamy’s managerial potential, and have given him permission to speak to Oxford.

“This could be a good move for his career.”

Bellamy completed a move to West Ham for a fee of £7.5 million on 10 July 2007, signing a five-year contract with the club. This was at their record signing at the time. He left for Man City in January 2009 after making 26 appearances for the Hammers, scoring nine goals, a strike rate of just over a goal every three games.