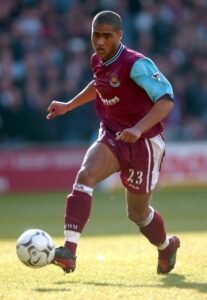 A former Hammer has told Chelsea to abandon any thoughts of trying to sign Declan Rice.

And he has been joined by ClaretandHugh blogger Terry Westley who is convince his star protegee as the Hammers academy chiif will be staying where he is anyway.

Johnson is not giving his views from a romantic of hopeful point of view unlike Terry who is a huge fan of Dec’s both as a footballer and man.

The former Hammers, Chelsea and Liverpool  defender has studied the Blues  game and simply doesn’t feel that it would suit our current skipper.

The likelihood of a move happening looks to have disappeared for now although some bright media spark will no doubt start to get the rumour restarted on a slow news day.

But both Johnson and Westley – who has made it clear in the past Dec is West Ham to his backbone won’t be moving regardless.

And speaking to CheltenhamGuides.com, Johnson said “I’m a big fan of Declan Rice, I think he’s a great player but is better as a holding midfielder.

Start supporting Claret and Hugh today Claret & Hugh’s team of creators work with passion and pride to bring you the quality of content that keeps you coming back for more. Support for our creators, however big or small, will help us keep your Hammers content fresh, frequent and loyal to the club. £5 per month £10 per month £20 per month £50 per year
“At West Ham he’s a holding midfielder but does a lot more, but at Chelsea, he wouldn’t be asked to do more.

“I don’t see him as a central-defender for Chelsea, he could slot in against the right opponents but I think he’s a better player as a holding midfielder.

“Declan Rice has a problem because you have to be exceptionally good to be a holding midfielder that a big clubs pays £80/£90m for.

“He will want to play for the biggest club he possibly can but to do that he will have to narrow down his position and be the best at it instead of being a decent centre-back, a decent holding midfielder and a decent midfielder.”

“If West Ham qualify for the Champions League they’ll have much bigger budgets than they thought they were going to have so they may not have to sell him.

“He loves West Ham and is enjoying his football there so it’s not a club he’ll want to rush away from.

“Sometimes the grass isn’t always greener on the other side, it would be different if West Ham were towards the bottom of the table and other clubs came calling.”