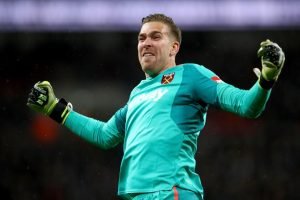 Former Hammer Adrian has been discussing his life at Liverpool after a move from the London Stadium.

And he clearly  has no regret about his move from the London Stadium despite some highs and lows at Anfield.

The keeper lost his place and decided on a move from the Hammers as his contract came to an end and Lukasz Fabianski was at the top of his game.

The Spaniard has been linked with a further move to Spain this summer but has clearly made up his mind to remain in the Premier League.

Always a crowd favourite at the Hammers the 33 year old was snapped up by Liverpool ahead of a rumoured move back to his homeland.

It’s been a great move for him but there were those among the Hammers fan base who believed he should have been held onto by the board at West Ham.

The reality was he was offered a deal but chose to make a move clearly seeing he would remain in the shadows.

The  club has totally exceeded my expectations,’ he told Liverpool’s club’s official website.

‘I think coming here was the perfect decision at the perfect time, to come to the best team in the world right now.

‘I am really happy I took that decision, to have that patience in that moment.”