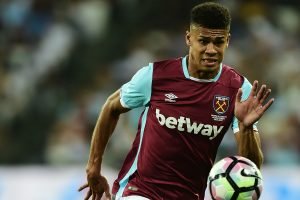 Ashley Fletcher is being chased by four Championship clubs who want to loan him for the upcoming season.

The Sun claims Middlesbrough, Leeds, Reading and Wolves are keen to give the former Manchester United youngster first team football this season.

However, reporter Andrew Dillon – a Hammers supporter who has decent links to the club  – implies via insider quotes that it’s unlikely to happen.

He quotes his source as saying: ” Ashley is well thought of at West Ham. He’s going out to get some games under his belt.”

Were the club to consider putting the youngster out Reading can be ruled out of the running as the club remain unhappy at Reece Oxford’s ill fated move there last season.

Leeds have been interested for some time and would be hopeful the Hammers could have a change of heart.

Fletcher has featured in the Hammers two pre-season games this summer and scored and provided an assist against Fulham in the 2-1 victory last week.

← Poll: Where can West Ham finish in the league?
Parkes reckons Hart has it all to prove →
Click Here for Comments >