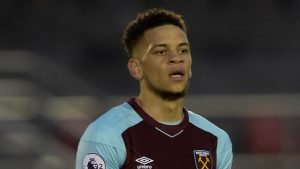 Four goal Marcus Browne – having scored all of them in the Under 23s win at Everton – described the massive feat as “one of his best days in football.”

It saw the Hammers soar into fifth place in the Premier League 2 Division One table after their promotion last season and followed a 0-1 win at Manchester City.

And after his haul, the beaming captain said: “It’s definitely up there with one of my better days in football!

I don’t think you go into any game thinking you’re going to score four goals, but I scored four and I’m delighted.

“It’s been a difficult week with two games in five days and we’ve got through it. I think the goal on Thursday gave me a bit more confidence going into today’s game and I feel like I’m playing with confidence and got four goals because of it.

“It was massive performance from the boys all round. We really dug in and stuck to the game plan and any game away from home that you win 4-0 in, it’s always massive.

“I’m obviously delighted to have scored all four goals.”

Browne’s campaign has been hampered by knee and back injuries but has been impressive since recovering and said: “It wasn’t easy being out for so long but the first couple of games back are where you’re getting back into it and you’re lacking a bit of fitness.

“You feel like you’re off the pace a bit and you’ve dropped down a few levels and you’re behind the boys.