Posted by Sean Whetstone on June 9, 2020 in Academy News 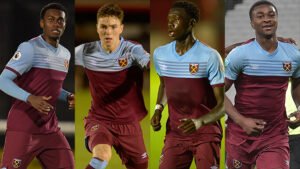 The young professionals in West Ham’s Under-23s side finished top and unbeaten in, Premier League 2 Division 2.

Having been with the Hammers from the age of eight, promising centre-back Akinola returned from a year-long injury lay-off in January to make an immediate impact for Halajko’s side, sporting the captain’s armband for the U23s during the second half of the season.

After also recovering from long-term injury, striker Adarkwa set about making up for lost time in the second half of the campaign, netting three goals in three competitive appearances.

Central midfielder Lewis, meanwhile, has been a consistent performer at the heart of the Irons’ midfield all season, recording six goals and an assist in 22 appearances.

Having successfully transitioned from his usual forward role to a consistent left-back this season, Longelo’s powerful runs, meanwhile, saw him record an additional two assists for the U23s.  All four players are now committed to West Ham United until the conclusion of June 2021.