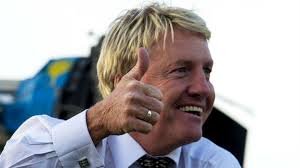 Hammers hero Frank Macavennie raised a glass in the Caribbean sun after hearing that Diafra has been offered a signed a new £25k a week West Ham United deal.

ClaretandHugh broke the news to the legendary Irons striker who immediately declared: “Fantastic news and that he’s been awarded it before it was due tells you everything.

“He’s the best thing to have happened to the club in years – he’s totally changed the dynamic at Upton Park.

“What I like about him so much is that he plays for the team – there’s no pursuit of personal glory. It’s the lads first and as a result all the accolades are coming his way.

“That he has signed a new deal is tremendous news. He’s great incredible goal instincts – knows where to run and is about as perfect a partner as you could get.

“I love Andy Carroll too. That lad can create carnage among defenders and is perfect for a striker like Diafra. The Hammers are amazing to watch and those two can spearhead us into Europe with the Champions League a real possibility.

← Former Fox Savage: “It has to be the Hammers”
Maiga hit by ban →
Click Here for Comments >