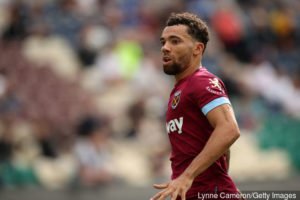 Ryan Fredericks is gearing up up for his ePremier League Invitational first-round match against Burnley this afternoon.

The  defender will be representing the Irons on the virtual pitch, as representatives among the 20 taking part in the EA SPORTS FIFA 20 for a four-day tournament.

The prize fund for the ePremier League Invitational will be donated to the #PlayersTogether initiative, which was created by Premier League players as a collective way of generating funds for the National Health Service and distributing them where they are needed most.

And when his first match – against Clarets winger Dwight McNeil, at 2.30pm on Tuesday, live on whufc.com – kicks off, that is a message Fredericks hopes to amplify.

He told whufc.com: “It’s great knowing that fans can stay in and still enjoy themselves watching something like this, instead of being tempted to go outside, and I’m happy to be a part of it.

“As for the tournament, I’ll let you know how confident I’m feeling after the first game! Overall, I’m not bad.

“I’ve been practising a little bit in the last week or so, but before that I hadn’t played for months, so I was a little bit rusty, but I’m ready now!”

“In terms of my FIFA style, because I can’t defend to save my life, I’ll try and keep hold of the ball for as long as possible!” he laughed. “I’ll try and limit them to not having too much of it, then hit them.

“All the teams in the competition are using 85-rated squads, so it doesn’t really matter who you’re playing. I’ve never seen Dwight play FIFA before, so I’m not too sure what he’s going to be like either – I’ll just set out to play my own game.”

← Irons speak out on transfer ‘target’
Big kick-off in May as league set to return! →
Click Here for Comments >