Fringe Hammer may get new deal 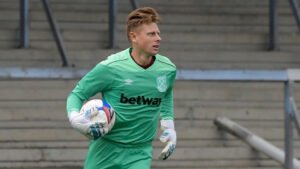 West Ham fringe stopper David Martin will need to wait until the end of the season to see if he us to be retained by the club.

However, he signed a contract extension last summer, which is expected  to expire at the end of this current season.

And ExWHUempluee is claiming that the club now has a decision to make at the end of the campaign on whether he is to be retained.

Currently, the club has Lukasz Fabianski, Alphonse Areola, Darren Randolph and Martin  on the staff -.

It remains to be seen whether David Moyes retains Areola – should the keep decide to stay anyway – whilst Randolph is very much available should a club offer terms.

And that nay well give the son of Hammers legend Alvin a chance of being given a further one year deal.