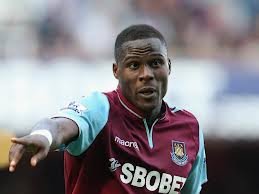 The Irons can hold their heads high at the end of a game in which they more than played their part but were denied a point by cock-up ref Anthony Taylor.

The official handed Liverpool a winning second half goal from the spot after goalkeeper Adrian and Joe Flanagan had contested a fifty/fifty ball.

It was never a pen but Steven Gerrard stepped up to score his second of the match and push the Reds back into top spot.

Gerrard handed his team the lead  near the end of the first half after James Tomkins had handled from Luis Suarez  sending Adrian the wrong way.

Guy Demel then popped up to score his first goal,from the club after a controversial moment when Taylor over-ruled his assistant when TV replays showed Andy Carroll appearing to interfere with goalkeeper Mingolet from a corner.

But for all the incidents there was no doubting the quality of the Hammers performance particularly during the first half when they had a real measure of control despite Suarez hitting the the bar midway through the first half.

Mark Noble saw a free kick fly wide and Mo Diame turned well to let fly with a wild effort before the game took off with the two goals inside a minute.

The visitors took control in the second half but without ever seriously threatening the Irons goal and Andy Carroll was always a threat and brought one incredible save from Mingolet with his far post header.

Manager Sam Allardyce handed Pablo Armero a start and the Colombian international grew into the game well and looks a ‘proper’ player as he bids to show himself worthy of a permanent deal next summer.

The manager has taken plenty of stick for his style of play this season but nobody could complain at what was on show today.

More of this  during the rest of the season and there’s points there for the taking.

But the lingering thought at the end was how different it might have been this term if we’d approached all our games with the same degree of positivity.

← Half Time Irons 1 Liverpool 1
Sam: ‘We have to sort this out at highest level’ →
Click Here for Comments >