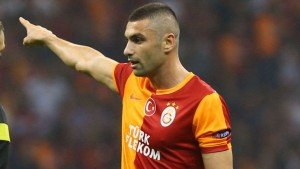 Galatasaray general secretary Fatih İşbecer  has broken silenc on Burak Yilmaz confirming that West Ham made a loan bid for him.

“We were made a loan bid from West Ham but we are after a permanent transfer deal so the deal fell through,”İşbecer told reporters.

The latest statement conflicts with Galatasaray’s president Dursun Özbek claiming he knew nothing about West Ham interest and that no offer had been made.

“I have received no offers Burak is our player and it really annoys me that these speculations have been made,” Özbek told reporters in Istanbul today.

These guys should really talk to each other! West Ham boss Bilic previously confirmed that Yılmaz was on his transfer target list and that his addition to the squad would be welcomed.

Bilic told Hürriyet reporter İzzet Çapa: “There is a striker problem right now at West Ham and if the board agree to sign a forward Burak Yilmaz is on my transfer list.”

Whatever the real truth on Yilmaz, everyone now appears to be in agreement that Yilmaz is no longer a West Ham target on the basis that Galatasaray are only interested in a permanent transfer.