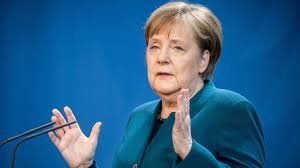 The plan had been put in place for the game to resume in Germany on May 9 but that has now been pushed back a week AT LEAST.

And it will come as a body blow to the Premier League who tomorrow put their Operation Restart before chairmen at a video conference after being encouraged by government to present them with a workable plan.

Most of that was reported by CandH in an earlier story today but the idea of playing games on neutral grounds could derail the whole plan anyway.

For if teams are allowed to use their own grounds players will be travelling all over the country with the much bigger risk of spreading the disease thought the UK.

Club in Germany had returned to training with hopes that the season would begin again on Saturday next week.

But the second Covid 19 spike we reported last night has seen the virus rate rise to  1.0, the ‘dividing line between growth and decline’.

Merkel’s chief of staff Helge Braun explained earlier today: ‘The contact restrictions will certainly now be extended until May 10 for the time being’.

Germany’s strict procedures during the outbreak have seen them handle the disease better than most countries, but Merkel said hospitals would be overwhelmed if the rate rises any further, meaning a second lock down would be ‘unavoidable’.

Government officials met on Thursday to decide the next steps in tackling the virus, and decided against giving clubs the blessing to resume playing.