Gerrard ready to blank the Irons 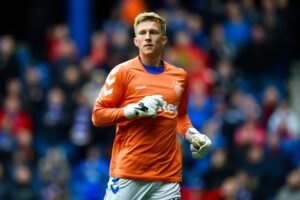 The Daily Record reports we have have identified  McCrorie as a long-term successor to Lukasz Fabianski although with a year left on his contract the Irons also believe that Nathan Trott may be ready to take over.

The report claims however, that Gerrard’s side are keen for the 22-year-old goalkeeper – currently on loan at Livingston – to extend his current contract which runs out in two years’ time, and preliminary talks are already underway.

That, however, is not always the greatest guide as clubs have a regular habit of ensuring they extend a player’s deal in order to get the best possible price.

And with there no certainties  over when the transfer market will open and whether clubs will be in a financial position to splash the cash this is another piece of speculation to be treated with caution.

Like Trott at West Ham McCrorie is seen as a natural successor to 38 year old Allan McGregor and there will presumably be other priorities for the Irons in the summer.

ClaretandHugh says: It seems highly improbable that the Hammers will move in this direction during the window – whenever that opens – with Fabianski still having a year to go on his deal with a one year option. A goalkeeper is in no way a pressing problem with Darren Randolph back on the staff and David Martin as back up in the event of problems. Indeed the Irons will be far more likely to be looking for an outward move by Roberto to Alaves where he is currently on loan although that looks extremely unlikely given he still hasn’t made a single appearance for the club since joining last window almost immediately after Manuel Pellegrini’s exit following the game against Leicester City.

One comment on “Gerrard ready to blank the Irons”