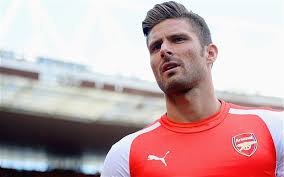 Arsenal striker Olivier Giroud’s moment of utter madness when headbutting Nedum Onuoha in the win over Queens Park Rangers yesterday is great news for the Hammers.

The French striker immediately ruled himself out of the game at Upton Park tomorrow and after scoring six goals in his nine Premier league appearances this season, that’s a big boost for us.

ClaretandHugh pundit Leroy Rosenior was delighted at the news declaring: “If there was one player you’d probably go for Sanchez first and Giroud second but there wouldn’t be much in it. Giroud is a “big miss” for them.

“He will also be missed defensively as much as offensively because we are good at set pieces and he would be is a big help in those situations.

“It was a crazy thing for the lad to do but nobody at our place will be complaining nbecause he’s a massive goal threat.”

Arsene Wenger is now set to start with Danny Welbeck up front although Claretandhugh understands that theo Walcott may be fit to return. “