Give it a rest Sam 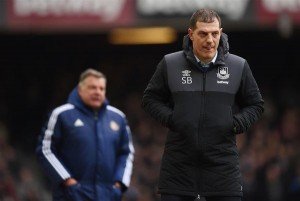 Former boss can’t help himself by suggesting Sunderland is a bigger club than West Ham in his latest dig at the Hammers.

Big Sam told the Telegraph “Retirement isn’t on the horizon, I don’t think so, there is a lot to be talked about at the end of the season, but I’ve got a lot more to give. I’ve got no regrets about taking this job.”

“I contemplated retirement. I rotated as a pundit at the start of the season, I didn’t think a job I wanted would come up as soon as it did. It caught me by surprise. I couldn’t say no to Sunderland. I was here as a player, I worked as a coach under Peter Reid and coming back here as a manager was not something I could turn down.”

“I do have an emotional bond. It’s a huge club. It’s a bigger club than West Ham, or at least it is prior to West Ham’s move into the Olympic Stadium.”

“I could have had longer off, but I knew what this club is; I knew about the facilities, the stadium, it’s a big, big club. This is a relatively deprived region in terms of wages, but it’s vibrant and there is a passionate love of football up here. That was very important for me.I think the thing that makes it unique up here is the percentage of people who live in Sunderland who come to support their team every week,” he explained. “It far outweighs other towns and cities across the country.”

5 comments on “Give it a rest Sam”