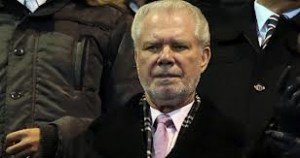 West Ham co-chairman David Gold has again been the target of an internet troll.

Gold has regularly been abused on Twitter and on one infamous occasion was portrayed as a suspect in the Madeline Mccann case.

But he has continually pledged in interviews with ClaretandHugh not to be forced off the social network.

He is the only Premier League chairman who attempts to keep fans up to date with events inside the club.

And today he tweeted: “It has been confirmed that striker Andy Carroll has resumed training, but there is no time-scale on his possible return. dg”

He was immediately insulted by a troll who declared: ” no s..t Sherlock – when are you retiring David?”

The forthright Gold immediately put the guy in his place by snapping back: “As soon as you find some one more dedicated and passionate than me. dg “