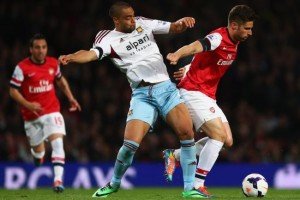 West Ham still have received no bids  or inquiries for Winston Reid despite morning reports the central defender has insisted he wants to chance to join Arsenal if they make a January if they make an offer.

Co chairman David Gold told ClaretandHugh exclusively: “To my knowledge there has been no inquiry of any kind.”

Arsene Wenger has confirmed he is in for a new centre-back this month and Reid, out of contract in the summer, does not want to be denied a dream move.

However, despite all the surrounding publicity Gold said: “There has been nothing and we are all at the point now where we just want a decision and we hope that he will sign the very good offer we have put in front of him.

“We understand what Winston is trying to do – get the best deal he can for himself and his family – but we believe it’s time for him to make his decision and we hope it’s to sign.”

← Allardyce to give FA Cup a real go!
Kouyate’s Senegal away to a flier →
Click Here for Comments >