Gold on his way to Dagenham 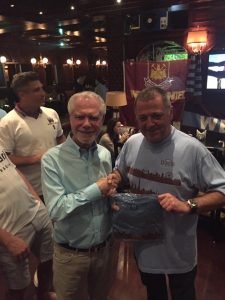 West Ham’s board of directors will be represented by co chairman David Gold at tonight’s friendly fixture against Dagenham and Redbridge.

There had been serious doubts over whether either of the co chairmen would arrive at the game after the events at the Burnley game but ClaretandHugh understands that Gold will take his place at the game.

However, David Sullivan – as we reported yesterday – will not be at the game as he has been involved in a day long – event at the Royal Albert Hall.

He is supporting the Teenage Cancer Trust of which he is a patron and to which he has donated down the years.
Gold is understood to believe that it was important the board should be represented at a game which they had arranged in order to help the financially struggling Daggers and is a regular at most Hammers “fringe ” games.
As reported earlier young Nathan Holland is expected to make an appearance in the match following his recovery from a serious hamstring injury along with winter signing Jordan Hugill.
Kick off is at 7.30
Permalink