Gold: “We will give Andy Carroll another week”

Posted by Sean Whetstone on November 28, 2016 in News, Whispers 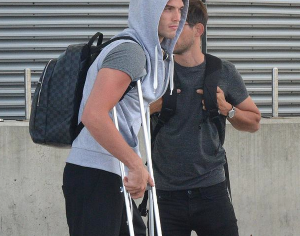 West Ham joint chairman David Gold has said that the club decided against introducing Andy Carroll back from injury on Sunday and instead will give him another week of intensive training which will presumably rule him out of the second game against Manchester United in the EFL cup on Wednesday evening.

Gold tweeted last night “It was decided not to reintroduce Andy Carroll for today’s game against MU but to give him another week of intensive training. dg”

The crocked striker was injured during a 1-1 draw away to Romanian champions Astra Giurgiu in their Europa League play-off first leg back in August, at the time we were told he would be out for no more than six weeks.

Diafra Sakho became the first West Ham striker to score this season on Sunday after he grabbed the 90 second opener at Old Trafford. Unfortunately he is also injured again after a previous three month lay off with a back issue. He was taken off in the 66th minute and undergoes a scan today for a hamstring injury which could see him out for several weeks.

12 comments on “Gold: “We will give Andy Carroll another week””