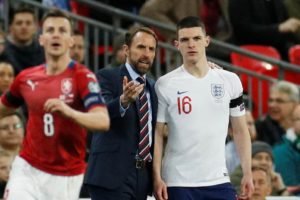 Good and bad news for Irons internationals last night so let’s get the bad out of the way first!

Declan Rice was at the heart of Englnd’s midfield alongside his best pal Mason Mount in an England team that lost its first qualifying game in ten years in the UEFA Euro 2020 qualifying game.

The Three Lions collapsed to a late defeat against the Czech Republic.

It was Dec’s third consecutive start for the team but his sixth cap and although he was his normal industrious self it won’t have helped his disappointment at being part of the first beating in a so many years.

It leaves Gareth Southgate’s team level on points with the Czechs at the top of Group A although we have a game in hand d against bottom side Bulgaria in Sofia on Monday evening.

The good news came for Andriy Yarmolenko and Ukraine, who put in an assured display to  see off Lithuania 2-0 in Group B.

Yarmo was out on the right – as for the Irons – but left the action after just over an hour with a comfortable 2-0 victory in the bag.

It took the Ukraine five points ahead of second-placed Portugal – the team they face next,  in Kiev on Monday night.

← Bonus time for Fabianski and Antonio
Memo to Keane after Rice outburst – GROW UP! →
Click Here for Comments >

One comment on “Good and bad news for two Irons”