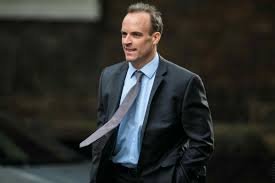 Speaking on the Andrew Marr show he declared: “We do want to look – when it is safe, when it is responsible – at ways to allow more outdoor activities to take place, but again we have got to have the evidence that that is a sure-footed step – doesn’t allow coronavirus to get a grip back on the country.”

That sport is among the first considerations is no real surprise as the mood of the nation grows increasingly impatient for an easing of the situation.

It means that not only football will be on the agenda for a return to TV and there is news today that Arsenal have returned to the training ground under the strictest conditions.

Today it reports that the government is now pushing for sporting events to get back on track to bring the public some positivity.

Lockdown would certainly become a tad more bearable  but the government stresses that the considerations have to be entirely safe and figures continuing to decline.

It adds: ‘Premier League chiefs have drawn up a plan called ‘Project Restart’ which could see matches played again as soon as June 8 at ‘approved neutral venues.’

Clubs would prefer to host games in Premier League stadiums, but it is understood they could be convinced to play at club training grounds and neutral venues such as St George’s Park.

This plan also ‘allows for a three-week pre-season in which players would be training in full contact sessions.’

One idea is for players to be put into lockdown in nominated hotels for up to six weeks until the final matches are played.