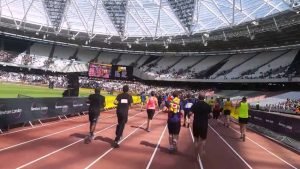 The Great Newham run which finishes inside London Stadium on the running track has been cancelled this year because of a lack of available Sundays. Run organisers say ‘Great Newham London Run won’t be taking place this year due to the lack of a suitable Sunday date over summer. We will, however, be staging Simplyhealth Great Team Relay on Wednesday 4 July and entries are open! For more information, visit grtrun.org/GTR2018’

As many as 20,000 have taken part in the Great Newham run each year since its inception including many West Ham supporters wearing their colours while often raising money for local charities.

With the Rolling Stones concerts in late May just nine days after West Ham host Everton. This is followed by Jay Z and Beyonce and Foo Fighters in June. In July the London Stadium will host the Athletics London World Cup 2018 over two days followed by the Muller Anniversary Games scheduled to complete on 22nd July. Stadium operators have 18 days to return the stadium to football mode before the 2018/2019 Premier League season starts on Saturday 11 August 2018

← Moyes heading for big survival bonus
Report: Chicharito to be thrown out of West Ham →
Click Here for Comments >