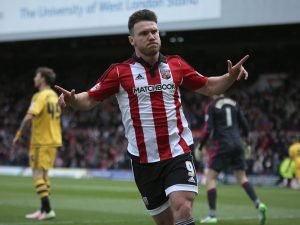 West Ham are reported to be preparing a new offer for Brentford’s Scott Hogan and according to the London Evening Standard could become our new striker by early next week.

The paper claims we have had two previous offers – the last of £8 million – rejected by the Championship side but that we are now set to go to £10 million.

Hogan will sit out tomorrow’s FA Cup tie against Eastleigh after the club announced he had suffered a glute injury but Standard Sport understands Brentford believe he may have played his last game for them.

Hogan has attracted interest from other clubs, including Newcastle, but is keen to play in the Premier League and West Ham remain the front runners to complete the deal.