Gunner Campbell ruled out for Irons 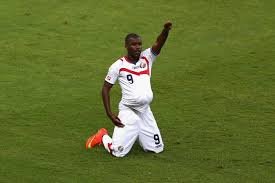 West Ham would have liked to take both Carl Jenkinson and Joel Campbell from Arsenal on loan but were unable to under Premier League rules.

Gunners and Costa Rica striker Campbell was very much on the Hammers hit list but in the end the club decided to go for Jenkinson option.

Campbell enjoyed an impressive World Cup campaign and the Hammers weighed up a move for him following the injury to Andy Carroll.

But in the end they opted for attacking wing back Jenkinson as the hunt still goes on for a striker.

An Irons source told ClaretandHugh exclusively: We would have liked Joel. Sadly we have an Arsenal player on loan, you can’t have two from the same club at the same time.

Arsenal will make no decision on Joel till much later in the month, they might still keep him.”