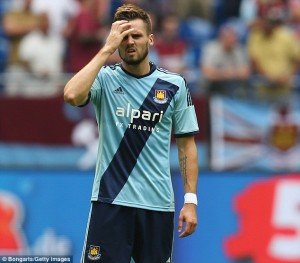 West Ham are unlikely to be able to make Carl Jenkinson’s stay at Upton Park permanent at the end of the season!

The on-loan Arsenal star produced his most impressive performance in a West Ham shirt at Burnley on Saturday and, with Aaron Cresswell, was singled out for special praise  manager Sam Allardyce.

The club would love to believe that they can make the deal a permanent arrangement but ClaretandHugh has learned that this was one of the few loan deals in which there was no ‘to buy’ clause involved.

On asking the question about a permanent deal earlier this evening we were told: “Sadly, there’s no option to buy and we believe Arsenal will want him back.

“We will have a go but he’s a top young player and it would be a surprise if we could do a deal although much could depend on Arsenal’s injury position.

“As an England under 21 international he has a big future ahead of him and he is one we would like to get but it’s very much odds against as things stand.”