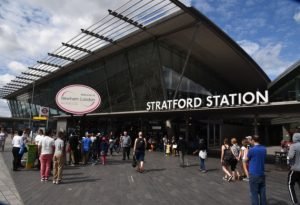 here are safety concerns around Stratford after the latest attack occurred at the station heavily used by West Ham supporters on match days.

British Transport Police were called just before 6am this morning after receiving reports that two men had been assaulted.

A 26-year-old from East Ham was arrested on suspicion of actual bodily harm, common assault and possession of an offensive weapon. During the arrest, police recovered a hammer. A witness told the Newham Recorder that passers-by helped to tackle the man to the ground.

Both victims have been taken to hospital. The first had a laceration to the head and suspected fractured shoulder, and the other suffered minor bruising. Neither have life-threatening injuries. The suspect has been taken into custody and police have begun enquiries to find out what happened leading up to the attack.

The attack is the latest incident that has happened in around Stratford centre and Westfield Shopping Centre.