Hammer calls on fans to help the needy 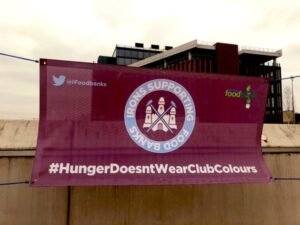 West Ham supporter John Ratomski, the founder of Irons Supporting Foodbanks, has called on Hammers fans to help the needy in Newham in this time of crisis. The Hammers Foodbank group were collecting food for the Newham Foodbank in Beckton before every home game before the suspension of football.

And with donations drying up because of the lockdown, the Newham Foodbank has been forced to buy food and toiletries from local supermarkets in order to meet their clients’ needs.

“There is a not a lot more we can do in terms of collections from an Irons point of view, but that doesn’t mean we can’t make some sort of contribution,”  Ratomski told the Newham Recorder

“You and me are in lockdown which is inconvenient, but it is nothing compared to the needs of the vulnerable in the borough and there are a lot of them. The Beckton branch opened up the other day and there was a big queue outside waiting to get in,” added John.

“We have had some great contributions from the club, the council, the LLDC, the stewards at Westfield and the Spire London East Hospital amongst others,”

“But there is still a lot more to be done and West Ham fans can give money directly to the Newham Foodbank, because they really need it.

“There are some families in Newham which have seven members, so just think how much it costs to feed them for just three days.

“There is a lot of hardship out there and I am worried about it and I think it is going to get a lot worse before it gets better.

“We have been in contact with the West Ham Foundation and the club about doing more so hopefully they will come up with something to help.

“These are difficult and unprecedented times and it will cost money to try and help these people,”

For West Ham fans unable to spend their hard-earned money at the match a donation can be made  at https://www.give.net/newham_foodbank