Posted by Sean Whetstone on February 16, 2020 in News, Whispers 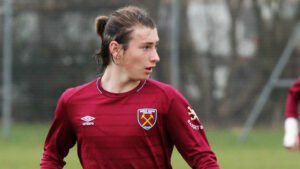 West Ham youngster Kai Corbett has committed his future to the Hammers despite strong interest from the Premier League and football league. On Sunday the 17-year-old confirmed his future himself by posting his own message.

He wrote “I have had a very positive meeting with West Ham, so I am delighted to say that I have chosen to stay with the club I have spent six years at. My goal is to play at the highest level of professional football so I am sure people will understand that it is important to me that I am given opportunities to progress. Although most don’t know I choose not to go and look a number of other Premier League clubs as I felt on reflection that West Ham United will help me develop my game and give me the chance to push and grow towards first-team football. I am looking forward to progressing with West Ham Utd and I will work hard and perform well to earn my opportunities to keep climbing closer to my goal of playing in the Premier League”

The player was reported to have trials with Bristol City and Manchester United in recent weeks but decided to return to East London.

Corbett, capable of leading the line as a striker or playing in the flanks or as an attacking midfielder, has scored almost 150 goals in three seasons for West Ham at youth level and is considered to be one of the best talents in the U18 ranks. In the 2018/19 season, he was a key player for the Hammers in the Generation Adidas Cup, where West Ham were beaten in the semi-final by the eventual winners, MLS franchise Seattle Sounders.

5 comments on “Hammer commits his future to West Ham”