Posted by Sean Whetstone on February 11, 2016 in News, Whispers 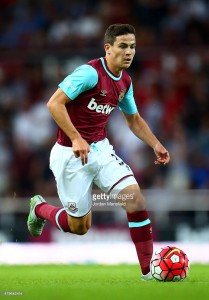 Hammer Josh Cullen has joined League One side Bradford City on loan initially until Saturday 12th March.The 19-year-old youngster, who can play as a holding midfielder as well as a number 10, joins West Ham teammate Reece Burke in West Yorkshire.

Cullen is expected to go straight into the Bradford squad for Saturday’s game away at Peterborough United, where he could line up against Hammers’ teammate Martin Samuelsen.

Speaking about Cullen’s arrival, Bantams boss Phil Parkinson on the Brafford website said: “We are delighted to have Josh on board. He has signed his paperwork and trained with the lads today (Thursday), and we look forward to working with him. Obviously we have Reece (Burke) here on loan from West Ham already and we hope that Josh can settle in just as well as he has.
“Josh has been in and around the first team environment at West Ham and has been on the bench several times so he is mature for his age. He goes straight into the squad for Saturday (vs Peterborough United).”
Permalink